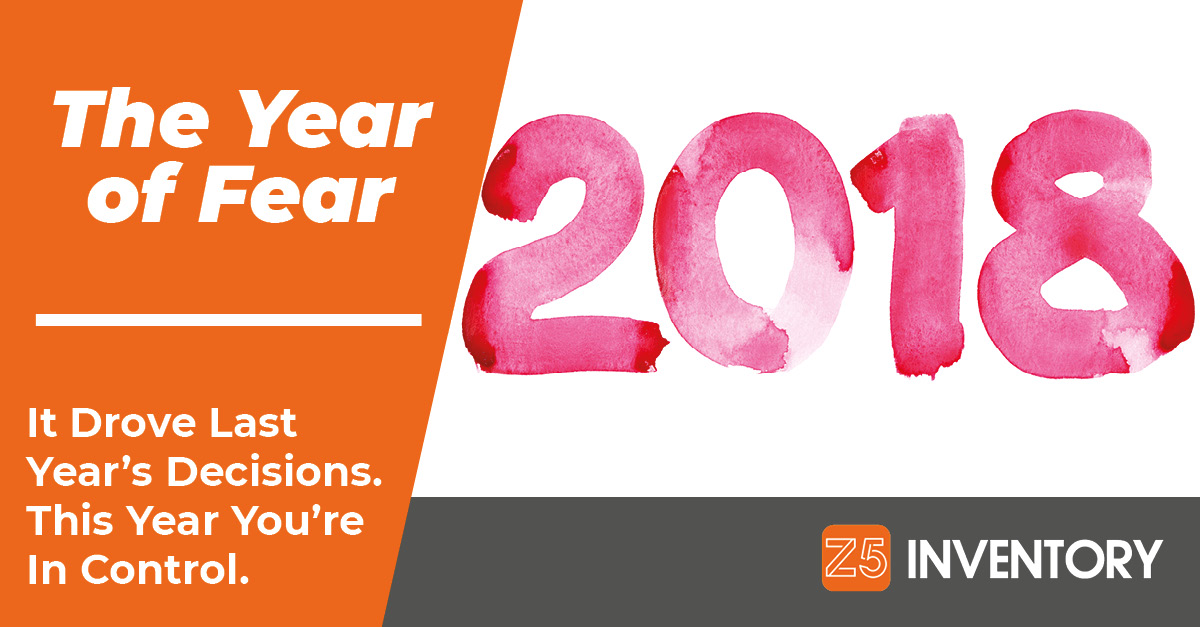 If that title sounds negative, that’s because it kind of is. But only kind of.

Fear is a great motivator. We saw plenty of news stories this last year of people and institutions that got up and changed something because they were afraid. If you can harness your fear into action – as opposed to the majority of healthcare management that recognizes the need for change but does nothing to implement that change – fear doesn’t have to be the mind killer.

2018 saw the bold proclamation of “The Death of Supply Chain Management.” It’s easy to read that and say, “Well, I’m still here, so it must not be true,” and dismiss it. It’s always easier to do nothing.

Here’s a list of the Five Fears of 2018: what people in healthcare and the supply chain were scared of last year and what you can do to transform that fear into action this year.

It felt like this last year brought with it a greater-than-usual onslaught of new technologies and solutions to problems we didn’t even know we had. (Maybe because the speed of innovation increases all the time. Maybe just because we’re all getting a little older.)

And it’s actually appropriate to be a little fearful of new tech. Blockchain was hyped all year, but we’re only beginning to see tentative applications so far. Just don’t be so apprehensive that you don’t move at all.

Forbes called 2018 “The Year of the Digital Supply Chain.” But just how digital is yours? Are you still using – just to pull a random example out of nowhere – paper count sheets? The way you’re doing things – the way you’ve always done things – is more comfortable. Of course it is. But the old ways will get you in trouble.

You need no better example than cybersecurity. If you have devices in your facilities that are able to connect to the internet, they’re vulnerable to hacking. (And if you don’t, we have a larger problem.) Use the fear of an imminent data breach – which will cost your hospital hundreds of thousands of dollars – to motivate you to change your passwords, update your tech, and prepare for a breach.

Part of your job is to manage cost. You’re smart enough to know when it’s time to implement new strategies to reduce spending. But that pressure to reduce spending in every possible instance can leak out of the professional world and into the personal. The focus on controlling every last cent leads to a fear of giving any away.

We heard plenty of stories last year of those who needed medical care putting it off or skipping treatment altogether because of the cost of that care. It turned out that a majority of young people defer healthcare because of its price. That’s objectively awful.

Trade’s classic trade-off is between cost and quality. That survey only proves what one of the most acclaimed TV shows of all time suggests: healthcare is costing many Americans their quality of life.

Some of these changes you can’t control (except, of course, with your vote). But you can control your corner of healthcare costs. Your savings could save a life.

Sure, you could argue that any fear is motivated by insecurity. But let’s talk about a very specific type. Nothing feels less safe than being alone. If you’re on the desert island, every problem is your responsibility to fix, and every danger affects you alone. It’s natural to find security in the company of others (even if they’re imagined).

In response to this fear, hospitals are finding security in partnering with other hospitals. Merging. The inescapability of healthcare mergers was one of the biggest stories of 2018. In many ways the decision to merge healthcare providers and systems seems like it’s born out of logic. Until you start looking at the facts.

The deals being brokered are lowering in value. The concentration of care increases financial risk. And – not to harp on it too much, but this is our business – mergers do not actually drive down the cost of healthcare.

There are more mergers coming in 2019. So how can we fight our fear and make sure they have some benefit? One way is to pay closer attention to these mergers, as Congress almost certainly will.

But it’s not all bad! That desire to work together – strength in numbers – led to a huge healthcare hiring surge in 2018. That’s great. Now we just have to make sure all the people are aligned on providing the best possible care at the lowest possible cost.

4. Fear Of Upsetting The Status Quo

If what you’ve always been doing is working, why change it? Because maybe it’s not working. Maybe nobody’s bothered to do the work of examining the process.

The reason that the public is keeping their eyes on companies like Amazon and Google to do what they do best – disrupt – is because the old healthcare delivery method isn’t working anymore. Make no mistake: this is about profit. Amazon’s initiative to lower the cost of healthcare isn’t purely altruistic. Interacting with healthcare isn’t an experience that makes the public happy. They’re willing to pay for an alternative. And there’s billions of dollars waiting for the people who are willing to find an alternative that works. (All this disruption creates more fear of having the status quo being disrupted without our permission or control. But we only had five bullet points’ worth of space, so that’ll have to wait till a later blog.)

The simplest example of healthcare plodding along on the same track is the story of sales reps in the OR. It’s such common practice that a lot of healthcare pros were shocked that the public found it shocking. But forward-looking healthcare pros looked at the practice and said, “Is this the best way?”

And that’s all it takes. You don’t have to carry the baton all the way across the finish line. Just start moving forward.

5. Fear Of Not Doing Enough

Let’s end on a high note. Because 2018 wasn’t all doom and gloom. There was plenty of amazing action taken by remarkable individuals. A variation on FOMO – a fear that, if you don’t do the right thing, no one will – has motivated change for the better across the world.

We cheered clinicians rushing to Somali communities that have been cut off from healthcare for decades. We were encouraged by the dedication of Ghanaian officials to deliver healthcare to remote communities via drone. We also had to ask ourselves, “Why isn’t that happening here?” Especially in light of our own home state’s lack of rural healthcare resources.

While we’re talking about ourselves, we don’t mind saying that, through the generosity of our partner hospitals and the dedication of the charitable organizations Project CURE and Cherish Uganda, in 2018 Z5 Inventory was able to facilitate the donation of medical supplies to children affected by HIV/AIDS in Africa (and many others in need around the world).

Back at home, volunteer doctors have come forward to provide healthcare to the uninsured. They’re using their skills and talents to make their community a better place. As we all should, in any way we can.

Just because these individuals are, as we said, remarkable doesn’t make them exceptional. They’re not somehow unique or more able to bring about change than you are. So get going.

If we had to sum it all up, we’d say that what we all fear the most is the unknown. It’s trite, but that doesn’t make it untrue.

Here’s the thing to remember, though: everything is unknown at some point. Every friend was a stranger. You can’t make the unknown known by avoiding interaction. If you don’t know what the situation is, you can’t prepare for it.

But enough negatives. Here’s what you can do: prepare for 2019. Its challenges are unknown right now, but you can take steps to intercept any changes before they come. And, if you see something that needs changing, you can do it!

Here are predictions from industry leaders about Healthcare in 2019 and Supply Chain in 2019. Now get out there and take them head-on!