How Will Healthcare Survive 2019? By Improving 5 Things. 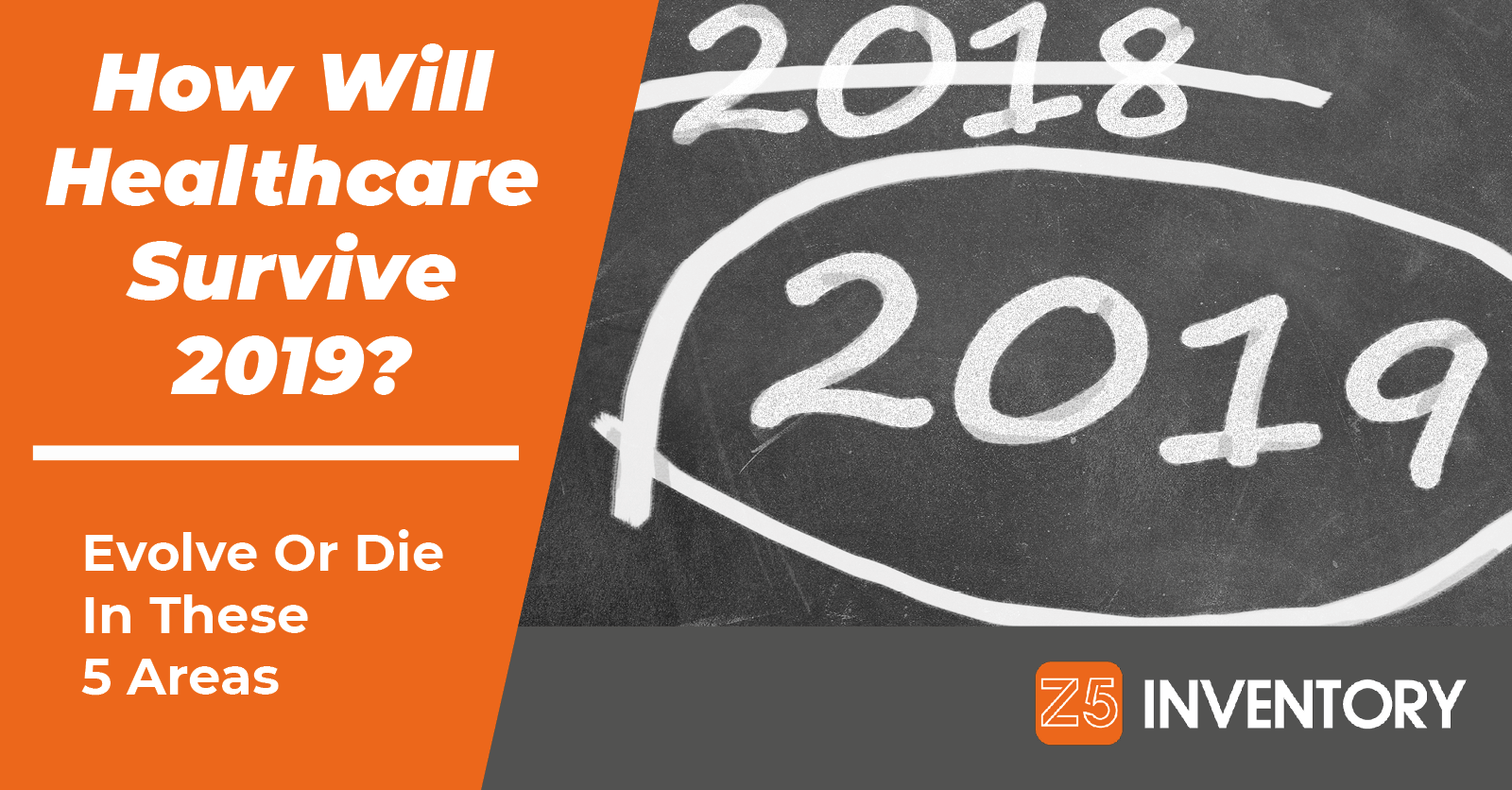 Earlier this year a team of industry experts declared, by way of the Harvard Business Review, the Death of the Supply Chain. Maybe that’s a little dramatic, but it gets the prevailing sentiment across: evolve or die.

Let’s face it. The year’s over. Sure, there’s a whole month and change left, but that’s all allocated to shopping and seeing/avoiding family and watching Tim Allen in varying levels of satisfactory holiday performances.

Best Of 2018 lists are already coming out, and any really important work can wait till next year. (But let’s not shut healthcare down altogether, please; this blog’s writer, at least, remembers more than one holiday in the Emergency Room.)

So, with the impending arrival of the New Year, what are your healthcare resolutions? Which are the areas you know need improvement and – more importantly – you have the power to improve?

Here’s a list of just five factors – some far-reaching, and some really specific – that you need to Increase or Decrease in the coming year.

Carry them with you into that dreaded year-end review with the boss. Won’t you look smart, telling them you’ve already got plans.

It’s not exactly a secret that the healthcare industry has trouble with transparency. The problem is so epidemic that a group of doctors in Florida made a parody video encouraging confusing billing. (Now, our definition of parody traditionally includes some element of humor, but not every doctor can be Patch Adams.)

And, before you try to get out of it on a technicality, you can’t be transparent by putting out a lot of documentation that the patient (your customer) can’t understand. Maybe the solution is as simple as working to make sure the people receiving your care understand what they’re receiving. And you’ll have to, given the increasing importance of your customers’ reviews.

What’s trickier than explaining yourself is admitting when you’ve made a mistake. As we’ve discussed, cyberattacks are an inevitability. You’ll need to have a plan about how to react – specifically how you’ll get that information out to the public quickly – to avoid a situation like Anthem.

(Look forward to our larger discussion of crime in healthcare soon. Speaking of…)

This one should be a given. Should.

We’re not accusing you of employing slave labor at your facilities. But here’s the problem: the majority of medical instruments are likely to come from areas known to use forced and child labor. And electronics are rife with materials from conflict areas.

So what can you do?

Well, some of the systemic problems will have to be addressed by systemic change. Adoption of blockchain records throughout the supply chain, for example, might lessen the problem. But, even if you get that process started on January 1st, that’s the kind of change that takes a long time.

In the meantime you can insist on transparency in your suppliers’ supply chains. Demand to know where their materials come from and who’s making them. It will only take you a series of emails, and it could help literally save lives. Worth it, right?

On the topic of stamping out injustice and fixing problems that have plagued humanity since, oh, forever (no big deal, right?) what’s your organization doing to combat the rampant sexual harassment in healthcare?

It’s not just good morals to foster a work environment where people feel safe. It’s also good business. Less turnover, more productivity. Being more sensitive about what you say and do is a small price to pay.

You know what might help healthcare? The same thing that’s going to help the supply chain industry: hiring more women. Do a better job with your hiring, and you create a great place to work.

Maybe you don’t care about people. You just care about the bottom line. While that’s not an attitude we can especially endorse, we can at least give you this freebie. Want to make more money? Stop throwing it away.

Nobody loves garbage. (Okay, except maybe this guy.)

This will not be a new concept to literally anyone who’s read this blog before. But you don’t have to take our word for it. Another day, another study that says every hospital in America is throwing away millions of dollars a year. No, really. Everyone’s talking about it.

You can’t afford to tell your boss that you don’t know where $11 Million went, can you?

What’s the solution? Data. The more you know what you have and how you use it, the more you can understand what you should buy, move, sell, and donate.

Boy, that sure does sound familiar…

It turns out that the two industries closest to our heart have adaptation aversion. The supply chain is slow to change, and healthcare is even slower.

Your bosses are probably afraid of Amazon and blockchain, even if they don’t know why exactly. There’s a lot of pressure to keep up, and that turns out to be a bad way to convince people to change. What you actually need to do is promote change from within. Because anyone can show your bosses the value of a new technology or policy, but if it comes from someone they trust, they’re more likely to adopt it. And you’re uniquely positioned to know how to make change stick with your organization.

But you have to be careful not to overdo it. Clinicians aren’t too good to learn a new software, but they shouldn’t be bogged down by it, either.

YOUR BRAIN – DECREASE OR INCREASE?:

Congratulations. You’re full of all this fabulous information. Plenty to read while the family is screaming at each other on Black Friday about who gets the last Turbo Man on the shelf.

But don’t just read. Do. Change requires action. So does survival. Remember the warning of your peers: the Death of the Supply Chain is coming. Unless you turn off the Tim Allen and do something about it.