What's The Cost of Count Sheets? Billions. Every Year. 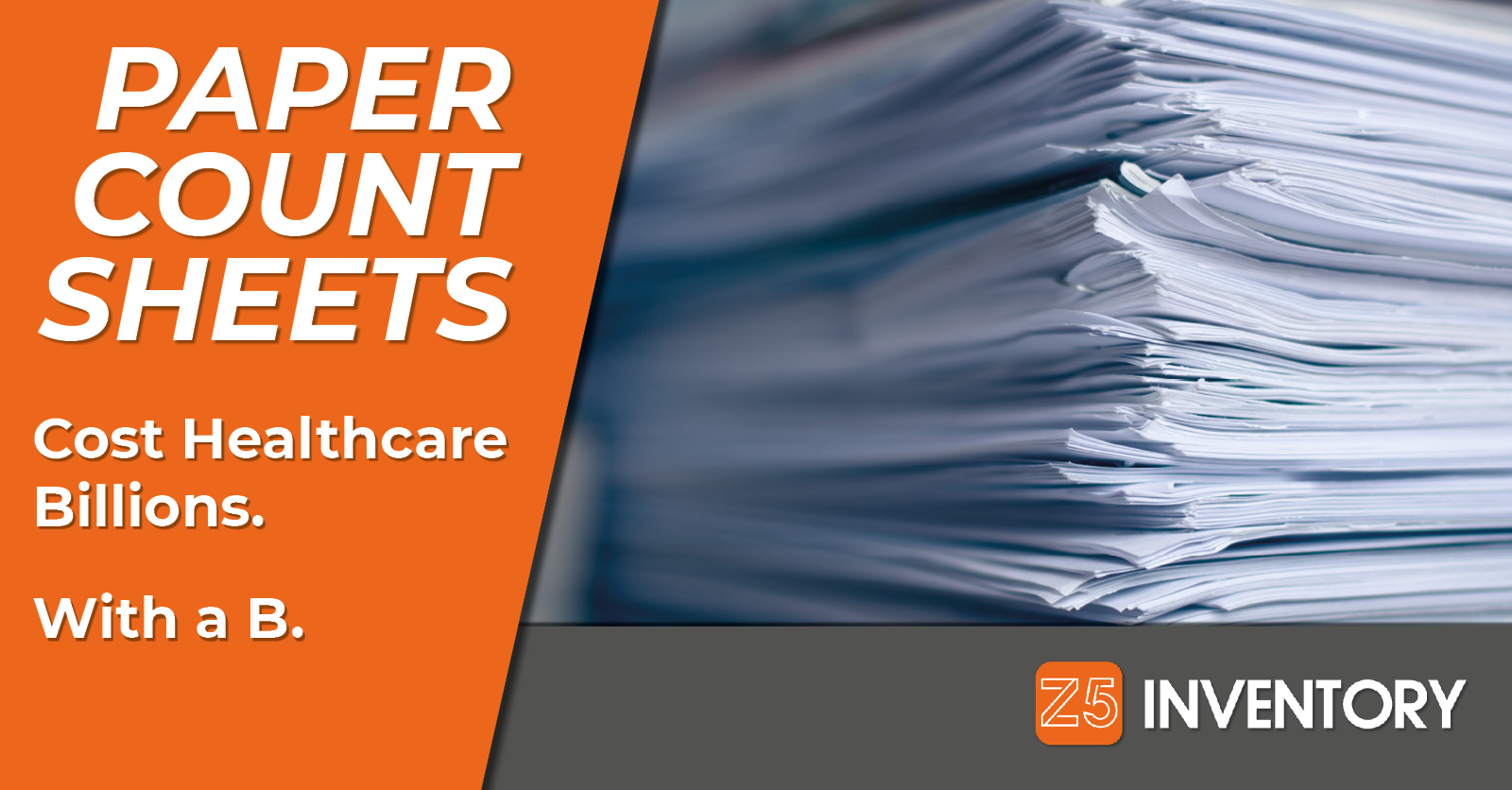 Count sheets have been a fixture of healthcare inventory for decades. And they suck.

Somebody had to say it officially, because it’s been said among your counters – probably even your office – every time those paper packets come out. And they’re right.

The simple truth is that count sheets are probably the root cause of weakness in the healthcare supply chain. (Yeah, let’s say “weakness.” That sounds better than “irresponsible excess and waste.”)

How Count Sheets Work (They Don’t)

Count sheets, if you don’t know (and if you don’t, bless your innocent, uncorrupted heart) are lists of products that are supposed to be counted in a given counting location. Stacks of paper are carefully, tediously compiled by materials managers, then handed to counters – nurses, techs, and supply staff alike – who have little time to get the job done before going back to the actual business of hospitals. Y’know, saving lives. And being good-looking.

Now, counting isn’t fun no matter what. Let’s not pretend otherwise. But when a counter has to flip through twenty pages’ worth of products to find the one syringe in front of them? That’s a special kind of frustration that leads to mistakes.

The count that you worked so hard to set up - putting hours into getting the sheets just so for the counters - is starting out sloppy because of the counters' time crunch and frustration. So what’s working in count sheets’ favor?

Well, they’re supposed to make a count easier. The product listed on the count sheet is supposed to match the order of what’s on the shelf. You’ll notice the operative phrase we keep using is: supposed to.

Let’s say your counter is in front of a shelf, armed with a count sheet of twenty products. As they're going through and checking off everything on your sheet – grumbling at whoever moved those sutures to a different container and hid a single 22G needle in the bin with all the 21G needles – how likely are they to notice that there are twenty-three different products on the shelf?

Here’s the scarier question: if every counter in the last five counts has relied on the count sheet, too, how likely are those missed products to expire?

(This is a real situation that we encountered, but we’ve changed the details to protect the guilty.)

A department – let’s say the OR – has ordered enough supplies that it warrants a delivery. So the materials manager drops off a box at the nurses’ station. Materials has a list of what they’ve dropped off, so there should be no problem adding those to the count sheets for the eventual inventory count, right?

Except no one has any idea where that product went.

There are 8 actual operating rooms, two supply areas, one robot room, and a pump room in the greater OR area. And when that box got dropped off, the people who use the product grabbed it and took it where it’s most used.

Maybe a member of materials staff went with every nurse to see where every product was placed, made notes, and inserted everything in the count sheet in the exact right spots in the exact counting locations. But would we be talking about it if that actually happened?

That product is either going to be on the wrong count sheet or not on one at all.

And that’s just for one delivery. How often are those deliveries being made? How many counts have been affected by this kind of laziness?

How much product is going to sit on the shelves? And sit… and sit…

You’re probably thinking a few boxes of gloves falling through the cracks doesn’t mean much in the final accounting. As long as a really expensive piece of equipment isn’t misplaced, the hospital can’t be experiencing that much loss, right?

But that's the excuse of a lazy counter, not a tough veteran of the Medical Supply Counting Wars like you.

Healthcare providers in America suffer a loss of $765 billion every year just due to poor inventory management. That’s not including expenses in every area – from digital security to paid time off. Just in wasted healthcare product. Every. Year.

Whether you’re the biggest for-profit healthcare system in the country or a single rural hospital, we’d be willing to bet (based on data from hundreds of inventory counts nationwide) that as much as a third of your inventory is headed for expiration.

You know where this is going, don’t you?

Z5 Inventory offers a mobile app-based count that can knock out a hospital’s physical inventory count in a single day while also (and here’s the really good part) providing an instant valuation. So if you’re tired of count sheets because - on top of all the work you put into making them - they take so long to enter into your system, good news. The Z5 Platform has you covered.

Oh, and once we have the data of what you actually have on your shelves, we can identify that product that’s going to expire before it does and help you reallocate it. No need to contribute to that $765 billion anymore.

That sounds better, doesn’t it?

Have the count sheets infected you, too? Are you in love with laziness? We've got you covered. All you have to do is click one button to start on your path toward supply chain excellence.

If you know what you have, it won’t expire. It’s as simple as that. Let us prove it to you.

Your Inventory Is Saying A Lot. It's Saying: "I Am Cash!"

Your Vote Defines Your Healthcare