Crime In Healthcare - The Bad Apples 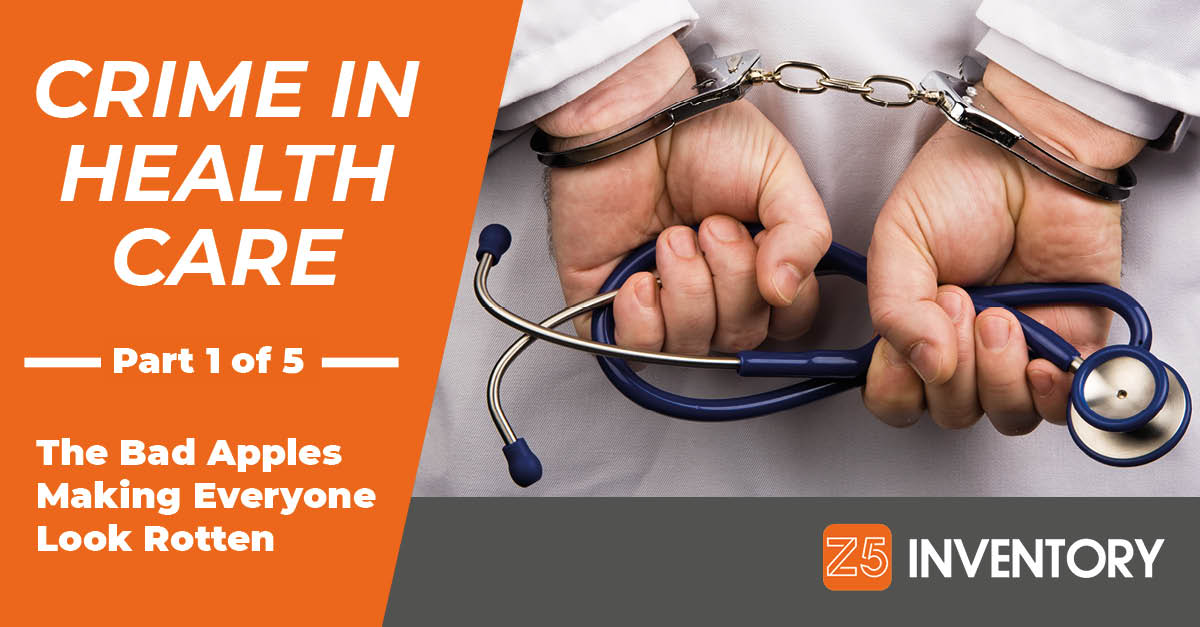 Despite the trust that the patient puts in their healthcare providers – that clinicians and other employees will only ever act with their best interests at heart – healthcare is just like any industry. Crime is perpetrated every day.

The most visible breaches of faith are easy to spot, prove, and prosecute. But much of what’s going on isn’t obvious. It goes unreported. The perpetrators go unpunished, and the victims’ losses go unaddressed.

In the first of our examinations of crime in healthcare, we’re taking a look at the most obvious and most insidious of the criminals: the people on the front line who are consciously harming their patients and payers.

The Bad Apples. (We wanted to use another word that sounds a lot like “apples,” but we’re trying to keep this PG.)

The most straightforward – and frequently reported – form of healthcare crime is billing fraud. Charging private or government insurance for equipment, services, and procedures that never happened. As simple as reporting that you provided physical therapy three times when you only provided it once. As complicated as creating fake identities for people who never existed and charging insurers for made-up procedures performed on made-up people.

There are also examples of more subtle fraud. In one Michigan case this year, doctors overprescribed opioids to their patients, performed unnecessary procedures, and then overcharged Medicare, Medicaid, and Blue Cross Blue Shield. They billed for as much as they possibly could without any regard for the needs or even safety of their patients.

If you think it would be too difficult to get away with complicated schemes like these, you’re right. We hear about these stories because the fraudsters are caught. The Justice Department went as far as Haiti to grab one of their most-wanted fugitives, who happened to defraud the government of millions. The authorities are not playing games.

So why attempt it?

Money. And lots of it. One foursome pulled in $931 Million. Those Michigan doctors? Nearly got away with over $460 Million. The government recovered $2.5 Billion last year alone. But, as we see in cases like this one, where more than $100,000 was never recovered even with the fraud caught, many more are getting away with it, and they will continue to.

Unless you keep a watchful eye and do something when you see fraud in action.

The most galling stories of healthcare’s bad apples are the ones who act directly against the patient. Again, the person who has entrusted their body to you – who has made themselves the most vulnerable – feels the most betrayed when that trust is broken.

There are simple options for this, too, like when healthcare workers steal from their patients. And there are complicated betrayals like stealing patients’ identities.

And then there are cases of clinicians directly hurting patients. A recent story springs to mind, because it’s been everywhere, and it should be. But it’s so unconscionable that we don’t feel the need to draw more attention to it here.

Luckily cases of doctors harming patients are extremely rare. But the fact that they happen at all is appalling.

Regardless of who is responsible for patient harm, the duty of everyone in a clinical environment is not to wait for the signs of harm to present themselves. Be vigilant. Do something.

That will continue to be a theme within our coverage of healthcare crime – fighting against ignorance and negligence. Because, for problems ranging from cybersecurity to forced labor, if you do nothing about it, you’re complicit.

And the authorities are not playing games.

This is Part One in Z5 Inventory’s five-part “Crime In Healthcare” series. To see all the published entries, click here. If you know of a story of healthcare crime that you think we should feature, email info@z5health.com.